We “Should” be Headed into a new Ice Age but, thanks to humankind, We’re Headed in the Opposite Direction

I thought right after we endured the hottest May temperature in more than 100 years, Tuesday’s record 93 degrees, it was an opportune time to broach the subject of global cooling.

Why in blazes would I think that? The reasons will unfold.

We have been in a prolonged period of minimal sunspot activity. Click here to see a NASA solar image taken on May 27 showing a complete absence of sunspots, courtesy of SpaceWeather.com.

Typically, our sun goes through an 11-year cycle, ranging from a solar sunspot maximum to a solar minimum. The following NASA video explains the fundamentals of the significance of this cycle on earth and its atmosphere.

The solar minimum can allow more energy from cosmic rays to reach our upper atmosphere, pose some increase in radiation to astronauts and allow more geomagnetic storms to be emitted from what are called coronal holes which develop during the minimum.

The approximate 11-year ebb and flow in the solar cycle dominates the sun at most times. 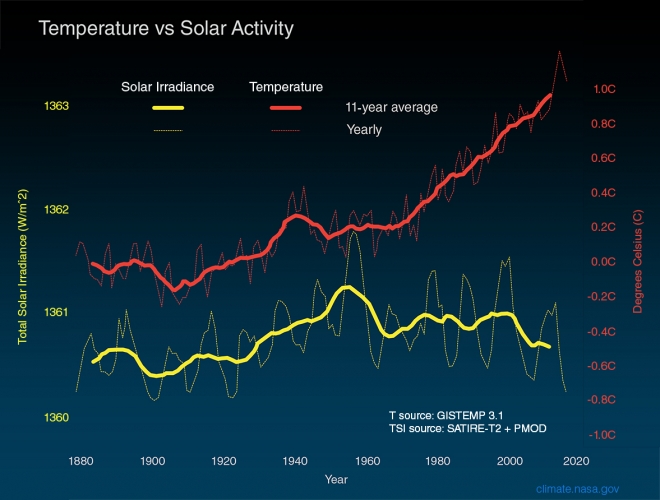 In this NASA graph, the red line shows the increase in mean global temperatures since 1880, while the yellow line shows the prevalence of the 11-year solar cycle.

As for the sun’s role in this warming, NASA states: “The amount of solar energy that Earth receives has followed the Sun’s natural 11-year cycle of small ups and downs with no net increase since the 1950s. Over the same period, global temperature has risen markedly. It is therefore extremely unlikely that the Sun has caused the observed global temperature warming trend over the past half-century.” The temperature has been increasing mainly due to human activity and our emissions of heat-trapping greenhouse gases in greater volumes.

Every once in a great while, the solar minimum persists with a lengthy disruption of the 11-year cycle. The last solar maximum a few years ago had fewer sunspots than usual, and we have entered a minimum that some solar scientists believe will evolve into what’s called a “Grand Solar Minimum.” The last such event bottomed out between 1650 and 1715, but actually lasted several centuries. In combination with greater volcanic activity and its particulate and gaseous emissions, the event is thought to have a correlation with the “Little Ice Age” of that period.

Not that there is real consensus among solar scientists yet on the extent of this current minimum, but a number of warming climate skeptics have written this coming Grand Solar Minimum will reverse global warming and send us into sharp cooling. Most of these skeptics are not scientists and are not familiar with the earth’s contemporary energy balances.

Solar activity has been lower than average for well over a decade, even at maxima. The correlation between fewer sunspots and climate, if it exists, has already failed to show up in this period as warming has continued to accelerate. But would a true Grand Solar Minimum overwhelm human activity and return global cooling to dominance? NASA reports solar scientists have calculated such an event might remove about three years of carbon dioxide growth’s warming. The amount of warming human activity generates will overwhelm any such cooling potential from a Grand Solar Minimum. NASA solar scientists’ conclusion: “The warming caused by the greenhouse gas emissions from the human burning of fossil fuels is six times greater than the possible decades-long cooling from a prolonged Grand Solar Minimum.

Even if a Grand Solar Minimum were to last a century, global temperatures would continue to warm. Because more factors than just variations in the sun’s output change global temperatures on Earth, the most dominant of those today being the warming coming from human-induced greenhouse gas emissions.”

On a much larger time frame, there are vast elements that speak to the impact of anthropogenic/human-caused warming. Our planet has three cyclical changes in phase that extend in long, predictable periods of time. Our orbit has an eccentricity that changes its shape from elliptical to more nearly circular over a 96,000-year period, changing solar input. There are also predictable changes over periods of 413,000 years during which the time of Earth’s closest orbital distance from the sun shifts from winter to summer, changing solar input. The tilt of Earth’s axis varies a few degrees (from its current 23.5 degrees) every 41,000 years, also changing solar input. These shifts are part of what is known as the Milankovitch Cycle – and  I haven’t even begun to scratch the surface of the inordinately complex impacts of these changes in phase.

Suffice it to say, these shifts have been strongly linked with progressions from ice ages to warm periods over Earth’s history. There have been a great deal of multidisciplinary analyses involving paleoclimatologists, physicists and mathematicians to define these links. In an article in the current issue of American Physics, London’s University College Earth Science professor Mark Maslin concludes what is in the consensus of the work done by these scientists in light of the current phases of these variations: “Without human interference, ice sheets should have been growing now, and the next glaciations would have happened sometime during the next 1,000 years.”

In other words, without anthropogenic warming we brought to the planet, Earth would have already begun to be headed into another ice age at this time. Examination of sediments and ice cores show an approximation of the current factors listed above (and others), there is a wealth of evidence supporting the warming we are experiencing is not part of a natural cycle. It is the large increase in greenhouse gases, especially carbon dioxide, that has taken us to where we are now, with glacial retreats, rising sea levels and all that accompanies a warming that would not be occurring if it weren’t for humanity.

Don Paul– Don Paul worked as a broadcast meteorologist for 34 years at all three Buffalo television stations, serving as chief meteorologist at WIVB for 29 years and chief at WGRZ for three years.
Contact Us Today Click Here